Final Fantasy 14 had a rough start, especially on Mac.  The base game was flawed in so many ways, even Square Enix worried it could be “the end of Final Fantasy”.

After careful consideration, due to the issues surrounding the Mac version, we have decided to offer a full refund to those who wish to receive one.

But Square Enix made good on its promise to improve the game. Mac Performance continues to improve with every update, just as the game itself went from abysmal at launch in 2010, to critically-acclaimed with the release of Shadowbringers, the game’s latest expansion.

There has never been a better time to get started with FFXVI! The game’s latest patch vastly upgraded the free trial, trimmed the main campaign, and made the overall experience better for newcomers! Details below. 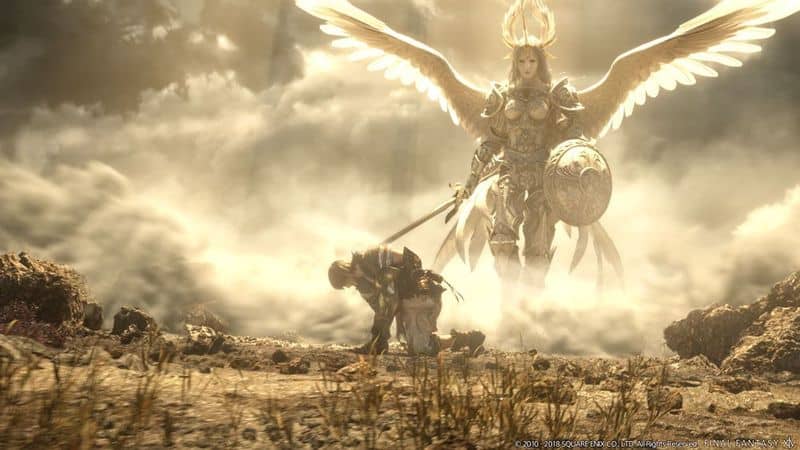 Final Fantasy 14 is becoming so good, it has easily earned a spot among the finest MMORPGs available for Mac.

Final Fantasy 14 on Mac: Shadowbringers and an upgraded free trial

On August 11, 2020, the game’s free trial was significantly upgraded.

FFXIV’s free trial now includes the base game and the Heavensward expansion, which many consider the best-written story in the game. The free trial now allows players to reach level 60 (previously, free trial players could only go to level 35) and gives players access to as many jobs as they want.

Some limitations remain of course, such as having no access to the marketboard, as well as some other social features. Still, there has never been a better time to start playing Final Fantasy 14.

Shadowbringers: The latest and most ambitious expansion

Shadowbringers, released on July 2, 2019, is the culmination of years of hard work. After FFXIV’s extremely poor reception in 2010, the game had to be relaunched with a new team. A Realm Reborn was FFXIV’s fresh new start, and with every new Expansion, the game has continued to improve.

And with an outstanding 91 Metascore, Shadowbringers appears to be FFXIV’s best expansion yet:

As is standard for any MMO expansion, Shadowbringers comes with a new campaign, new areas to explore, new races (two), a level cap increase, and more.

But above all, Shadowbringers delivers an epic experience, featuring an excellent story, interesting characters, new systems, and a stellar soundtrack.

Some are even calling it “the greatest Final Fantasy games ever made”.

If you ever wanted to experience a Final Fantasy game on Mac, or simply were looking for a new MMO to play, you can’t go wrong with FFXIV.

Worried about updating to macOS Catalina? Final Fantasy 14 is now updated to 64-bit and supports Catalina!

These are the game’s official system requirements:

Make sure your machine meets these before making a purchase. Also, the game was recently updated to 64-bit, making it compatible with macOS Catalina, due this fall.

Can you run Final Fantasy 14 on Mac?

We recently tried the game on several Macs and were surprised by the game’s smooth performance.

We tested it on the following machines:

Ads you can see below, if you have a somewhat recent Mac (like our 2016 MacBook Pro), your Mac should be able to run it without a problem:

But if your Mac is older than that, you should stay away from this game (unless, of course, your Mac has a powerful dedicated graphics card).

The game is available from both Square Enix’s official store and Steam. Yet for some reason, Steam only supports the Windows version of the game. It is unclear whether Steam will ever support FFXIV’s Mac version, therefore, it is preferable to download the game straight from Square Enix: