Company of Heroes 2 Mac Review: Can you run it?

Company Heroes 2 (CoH2) is one of my favorite real-time strategy games. It may be a few years old but the destructible environments, the graphics, and the intensity are still unrivaled.

I will always remember the first time a Panzer tank drove through a wall to surprise my infantry units or the time my mortars destroyed an entire building full of enemies.

The game easily earned a place among our Top 10 strategy games for Mac, but there was one caveat: those impressive graphics came at a cost. Not anymore.

Set during WWII, CoH 2 is a beautiful real-time strategy game. The destructible environments, weather effects, cover mechanics, realistic physics, they all play a part, creating an exciting and realistic battlefield.

But great looks and sophisticated effects always come at a price… This is a demanding game and some will have to sit this one out. Will you?

What’s new with Company of Heroes 2 on Mac?

On July 24, 2018, Feral Interactive released a free update and moved the game from the aging OpenGL graphics engine to the promising Metal 2 graphics API.

And as could be expected, the improvements are impressive. The game runs 52% faster on our 2014 27-inch iMac!

Apple did promise that Metal would be a game-changer, but this is the first time we see the improvements first-hand on an existing game. You can read more about it below.

It was hard to imagine how a sequel could significantly improve upon the legendary Company of Heroes, but CoH2 delivered. The sequel brought a new engine with much better graphics, an improved physics engine, dynamic weather and much more.

Plus, Company of Heroes 2 moves out of the tired battles we know too well (Battle of Normandy, anyone?) and features an intense single-player campaign that reenacts some of the infamous battles lead by the Red Army on the Eastern Front. If you’re more into online play, the game also features competitive and cooperative multiplayer (Mac-to-Mac only).

Bottom line, CoH2 is a terrific game and I’m not the only one thinks so. The game has received good reviews since day one from both professional critics and users alike:

Viewed side by side, it might be tough to distinguish Company of Heroes 2 from its predecessor. (….) However, that comparison is to one of the finest real-time strategy games ever made, and being mostly as good as that makes this an excellent game on its own.

You’re probably eager to give this game a go now, but you may want to read on before you take out your credit card. Not all Macs will be able to handle it…

Before going any further, you should make sure your Mac meets Company of Heroes 2’s Mac minimum requirements:

As you can see, CoH 2 is a demanding game.

The Test: Can you play Company of Heroes 2 on Mac?

We tested the game on six different machines:

Be aware that the 2013 13-inch MacBook Pro is not officially supported.

Why these machines? The purpose of these reviews is to help as many of you as we can which is why we test our games on machines as different from each other as possible. Hopefully, one of these Macs will be close enough to yours to provide results you can use really at home.

These are the settings we used to test the game:

Using the in-game benchmark tool, we tested the game on all Macs using the same settings. This allows us to have results that can be compared but in some cases, we had to use settings that were higher than what the developer recommends. 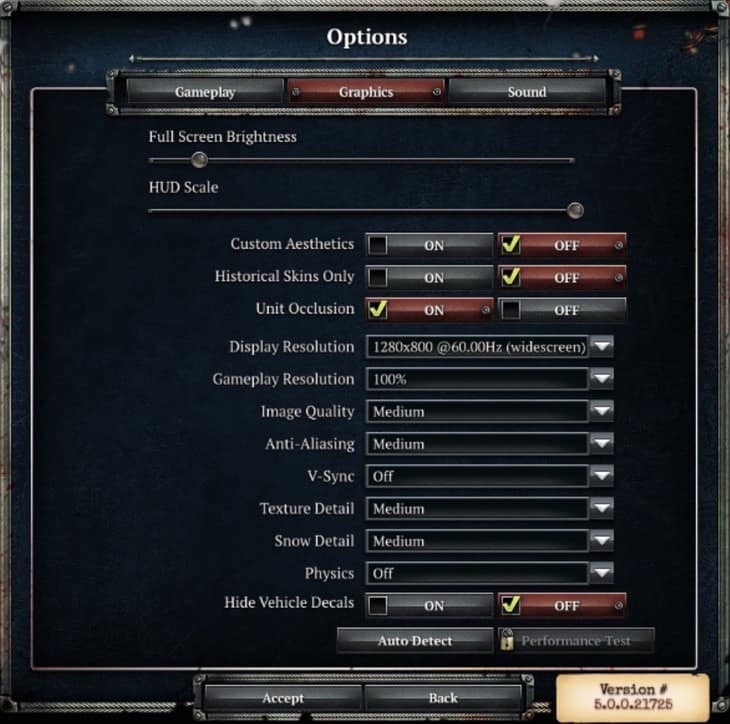 The Results: Metal saves Company of Heroes 2 for Mac

Initially, our results were much lower. In fact, the game was unplayable on everything except our high-end iMac (and even then, it only scored 31 FPS).

As you can see below, updating the game to use Metal paid off:

Can you play Company of Heroes 2 on a MacBook Pro?

But that was on Medium settings, which are much higher than what the developer recommends for this machine. Running the same tests on Minimum settings, the game becomes Borderline playable:

That’s a 42% increase if you’re keeping track of the improvements! Also, minimum settings don’t look as bad as one would imagine.

Can my Mac run Company of Heroes 2?

When we first ran these tests a few months ago, our 2014 27-inch iMac was the only one that could run the game at a Playable 31.5 FPS. Now that Company of Heroes 2 supports Metal, the same machine runs the game at a Smooth 48 FPS. That’s a 52% increase in performance.

Needless to say, that’s a spectacular improvement and proof that Metal is significantly faster than OpenGL.

Unfortunately Metal won’t do any miracles if you have an older, unsupported Mac. The game was Unplayable on our 2013 13-inch MacBook Pro at 6.9 FPS. With Metal, the game runs slightly faster at 7.2 FPS. Better but still unplayable.

And it doesn’t get any better using Minimum settings. The game manages less than 15 FPS which is still in Unplayable territory…

Then again Feral did warn us from the get-go:

Takeaway: It was hard to recommend CoH 2 unless you had a high-end iMac. But now that the game supports Metal, all gamers with modern MacBook Pros should be able to enjoy the game. However, if you have an older Mac, you will have to skip this one.

There’s never been a better time to give Company of Heroes 2 a try. It has never been cheaper, and since the update, even entry-level MacBook Pros should be able to handle it (which wasn’t the case before).

Developers tend to move on to new projects as soon as possible. After all, the sales come from the new games. That makes Feral’s work here even more admirable. They took an older game and decided to use a completely different graphics API. And they didn’t do it expecting to create hype (they barely mentioned it), they did it to improve the experience of their existing users.