While most Civ fans are busy playing Civilization 6 and its latest expansion, thousands of gamers with older machines continue to enjoy the still popular Civilization 5 on Mac.

Believe it or not, Civilization 5 remains an extremely popular game, almost as popular as the latest Civilization game. In fact, according to Steam Charts, Civ 5 has in average 19,644 concurrent players on Steam compared to the 21,979 on Civ 6.

How can that be possible? How can a game from 2010 be as popular as one of the best strategy games currently available?

Civ 6 may have better graphics and a more fine-tuned gameplay, but Civ 5 remains a more affordable choice that happens to run great on older Macs (something that can’t be said about Civ 6). But can your Mac run it?

Civilization 5 was a good game from Day 1. But that didn’t prevent Firaxis, the game’s developer, from releasing several expansions that further improved the game, sometimes drastically. Brave New World, the second and final expansion, included new civilizations, new Wonders and new units and buildings to play with.

But more importantly, it vastly improved trade, culture, and diplomacy, making Civ 5 a much better game.

Civilization 5 had great success in front of both its audience and professional reviewers. The game currently holds an outstanding 90 Metascore and 95% Overwhelmingly Positive Steam reviews from over 87,000 users.

It’s very hard to describe a Civilization game in great detail without starting to ramble. If you take nothing else from this review, know that Civilization V is more inviting, fun, and engrossing than any lengthy description can truly convey.

On top of that, Brave New World was a game-changer because it solved the one weakness Civ 5 had: a stall end-game. Normally, when you would get to the final stage of a game, all you could do was wait and see if the strategy you chose early on would work. 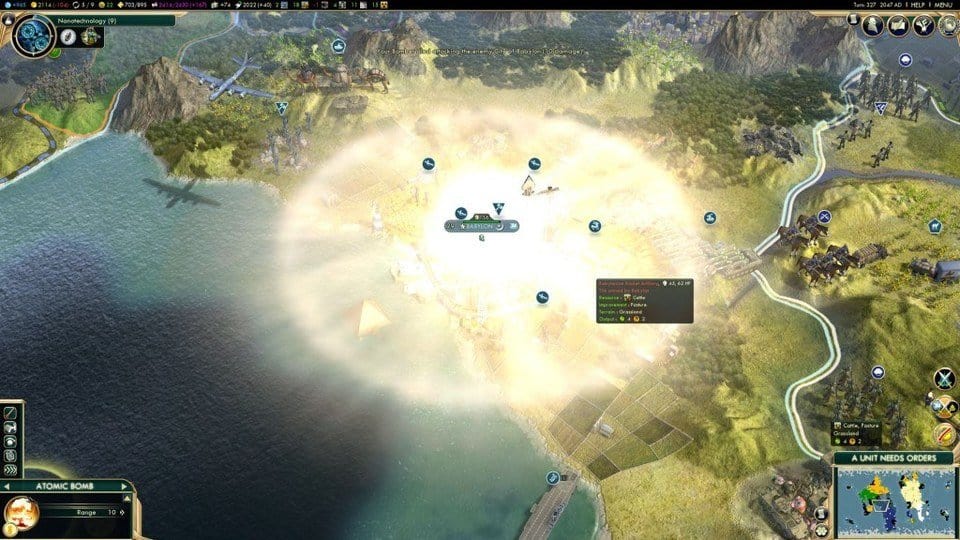 Without going too much into the details, the introduction of trade routes (which also propagate religion!), all-new tourism-related mechanics, a revamped role of city-states, and more, make Civ 5 infinitely more fun.

It would be unfair not to mention the great job Aspyr did on Civilization 5’s Mac version. Aspyr is one of the two porting companies with the most experience, and it shows. As you’ll see in a moment, Civ 5 has an excellent Mac version that runs smoothly and with virtually no bugs.

On top of that, Aspyr managed to release the game (and both expansions) shortly after their Windows release.

As mentioned before, Civ 5 has forgiving performance requirements. Still, make sure your machine meets the official Mac system requirements below:

The Test: Can you play Civilization 5 on Mac?

Civ 5 is, generally-speaking, a safe bet but can your Mac run it? To give you a proper answer, we did what we do best and tested the game on a couple of machines:

We always strive to test games on as many machines as possible. And the more different they are the one from one another, the better. That’s how we ensure these Mac Performance Reviews help as many as possible. 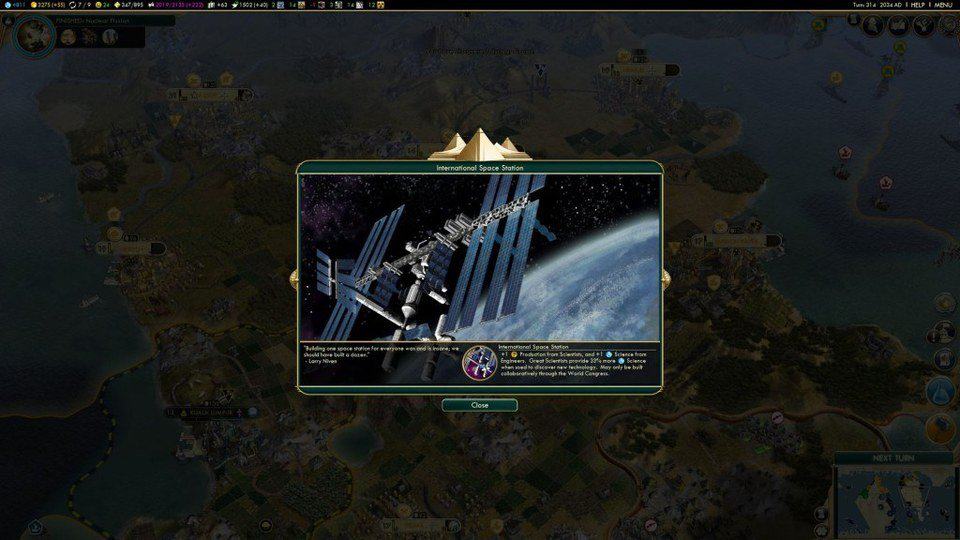 These are the settings we used to run Civilization 5’s internal benchmark :

Using our in-house benchmarking tool, we ran the game on every Mac using the same settings. 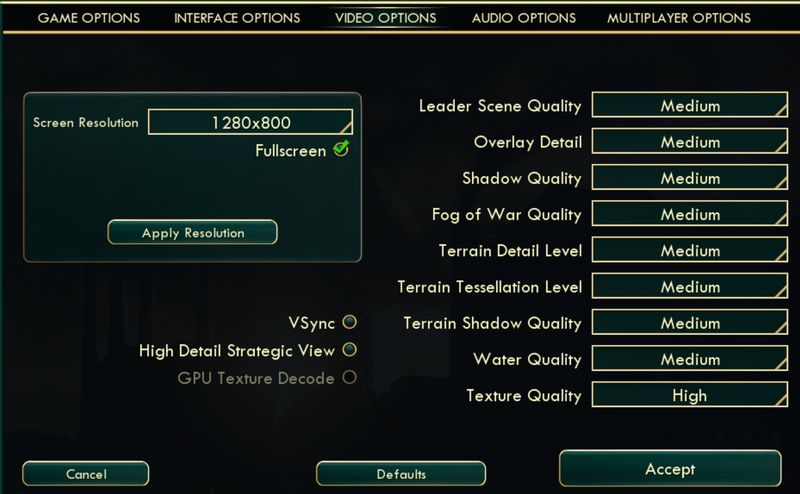 The Results: Finally, a Civilization everyone can enjoy!

As was to be expected from an almost 10-year old strategy game, Civ 5 runs great on Mac:

For the sake of clarity, we always aim for at least 30 FPS, which is more than enough for most gamers.

Can my Mac run Civilization 5?

Of all of our Mac Performance Reviews, this is one of the most straightforward. Can your Mac run it?  Unless you have a Mac from 2010 or older, you should be fine running Civilization 5 on Mac.

I know some of you may be thinking “duh, turn-based strategy games can even run on a potato”.  But just take a look at the newer Civilization 6. Granted, it’s a good looking game, but for a turn-based game, it’s extremely demanding.

And unless you have a brand-new Mac (or one with a dedicated graphics card), you should stay away from it.

You can read all about it in our official Civ 6 Performance Review. 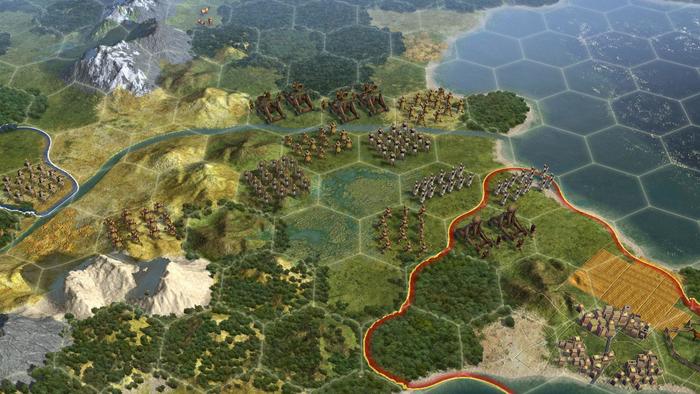 Can you play Civilization 5 on a MacBook Pro?

Both of our test machines were MacBook Pros and both easily ran Civ 5. Even the 2013 model did fine, running the game at a comfortable 62.8 Frames per second. If you have a MacBook from at least 2013, you can be certain you’ll be able to run Civ 5 without a problem.

But what if you have an even older machine? Based on the official system requirements, Civ 5 supports MacBooks with Intel HD 4000 graphics. The only models that featured those graphics were the 2012 models, meaning owners of MacBooks from 2012 should be safe too.

This is where it gets risky. The oldest Mac models that can support Civ 5 are, in theory, those that can run on macOS Sierra (based on the game’s system requirements). And these are the oldest machines that support macOS Sierra:

In any case, we always recommend staying on the safe side and making sure your machine meets the minimum system requirements before buying this game. One last alternative for those with Macs that cannot meet these requirements is to try Civilization Revolution, a capable mobile/PC alternative.

Download Civilization 5 for Mac: What version should you get?

Civilization 5 is available from most digital stores and prices are stable across the board. You can really get it from your favorite store.

The real question is what version you should get and whether or not you should get the Expansions separately or as part of a bundle or special Edition. In case it wasn’t clear before, we’re convinced Civ 5 is a much better game thanks to its last expansion, Brave New World and it would be a shame to experience Civ 5 without it.

For that reason, we recommend going for the Complete Edition, which includes the base game and all available expansions.