If you ask Mac gamers to name one survival game, you’ll probably hear Ark: Survival Evolved… a lot. That’s because in Ark, if you survive long enough, you get to tame, control and even ride dinosaurs and other prehistoric beasts. And while its focus is on multiplayer, it also includes a single-player offline mode.

In Ark, you survive and thrive by collecting resources, crafting items, taming animals including the aforementioned dinosaurs, forming or joining tribes and fighting off the other humans on the island. If you’re good enough, you can advance to upgrading your dinosaurs with lasers. Really.

But this is a persistent world, where (bad) things keep happening even when you’re away from the game. You’ve been warned.

And it’s not just hard to survive in Ark, it’s also known for being hard on your computer, so our tests this week are focusing on our more powerful Macs. Does your Mac have what it takes? As always, we’re here to help you figure that out.

And as we always do, we will be testing the game on several different Macs, with a focus on higher-end models. Also, note that in multiplayer you’ll need a good internet connection to keep from dealing with literally deadly lag.

After being on Steam Early Access for two years, Ark: Survival Evolved was finally released in August of 2017.

While a popular game as far as having a large user base (obviously important for a multiplayer game), Ark: Survival Evolved received mixed reviews.

Players like the depth of the game and its open world, but excessive grinding and a hostile environment for new players on public servers take away some of the fun.

A closer look at the reviews reveals the mixed feelings players have about the game. TJ Hafer’s detailed review at IGN concluded:

ARK: Survival Evolved has some great moments of battle with prehistoric beasts, but just as many of AI bugs and grind.

Feeling real fear in a game—fear of failure, fear of loss—can be really fun. Escaping that fear can be dramatic, and the tragedy of almost getting away can be unforgettable. But when so much of Ark is grinding drudgery, the consequences of its unforgiving style are hard to enjoy.

My Take: Ark: Survival Evolved is a survival game with some real strengths and some significant weaknesses. If you’re willing to put in the time, and die and lose your work over and over again, you can rise to a level where things get really fun.

But if you’re not willing to put up with the grind and the established user base, it may be too frustrating of a game for you.

Checking system requirements is particularly important for extremely demanding games such as this one. Unless you have a high-end Mac, you’d be wise to pay extra attention to the game’s requirements…

The Test: Can you run Ark: Survival Evolved on Mac?

So you’ve decided you’re willing, but is your Mac up to the challenge?

To evaluate how well Ark: Survival Evolved runs, we’ll test it on these models:

Be aware that Intel Integrated Graphics cards are not officially supported, but more on that below.

Why these machines? Our purpose is to help you understand how well this game runs on different setups. And hopefully, one of these setups will be similar enough to yours to give you a clear idea of what to expect. We usually have  a more varied selection of hardware but as this is a highly demanding game, we will focus on high-end models this time:

These are the settings we used to test Ark: Survival Evolved using our in-house FPS counter Count It for a fixed duration of 5 minutes: 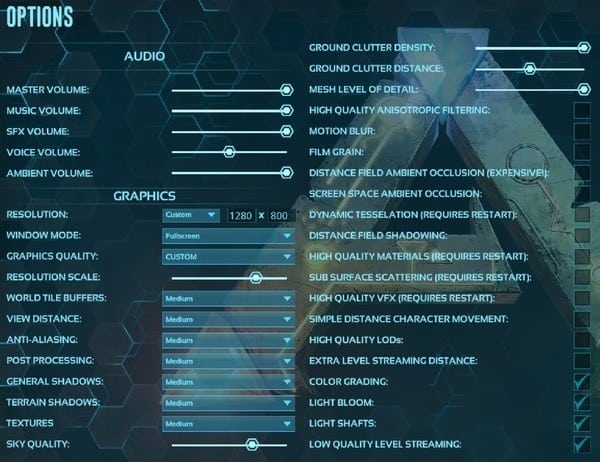 The Results: MacBook owners, stay away from this one…

We knew going in that the hardware requirements for Ark: Survival Evolved were challenging on the Mac side, and our results confirm that.

Recent Macs with dedicated graphics cards had no trouble with the game at our default setting, but everything else struggled at best.

There’s no question that a high-end Mac can play this game at our default settings. Frame rates of 49 FPS (2014 iMac) and 81 (2017 iMac) put our iMacs in the Smooth and Very Smooth range respectively, while our 2017 15-inch MacBook Pro (using the dedicated graphics card) hit a barely Playable 30 FPS.

This is what can be expected when turning the settings to high:

Takeaway: If you have a high-end Mac, you can expect to play this game at our default settings with no problem, and you can probably bump things up a bit and still have a silky smooth experience. But playing the game at maximum settings may be outside the reach of anything but a tricked out iMac Pro.

Can you play Ark: Survival Evolved on a MacBook Pro?

Things get tricky here, as they often do with more demanding games. Our 2016 MacBook Pro was nearly Borderline at 19 FPS with our default settings. With settings turned to the minimum it was firmly in the Borderline range at 27 FPS. While this is not ideal it indicates that the game should be playable on newer machines with integrated graphics.

Ultimately it’s a decision for you whether you want to spend your time and money on a game you’ll have to play at very low graphics settings.

Takeaway: If you have a recent Mac with an integrated chipset you may find the game playable. We hit high Borderline on a 2016 13-inch MacBook Pro with all the settings at their minimum. Whether that’s an acceptable tradeoff is up to you. How much do you want to ride those dinosaurs?

As you’d expect, the news gets worse. Our 2013 13-inch MacBook Pro stayed firmly in the Unplayable range, maxing out at 15.5 FPS with all the settings on minimum. If you have an older Mac with a dedicated graphics card, however, there’s a good chance you’ll be in better shape.

The difference between our 2014 iMac and 2013 MacBook Pro indicates that it’s the graphics card that’s doing much of the heavy lifting here, and a look at Ark’s system requirements (see below) indicates that even older machines with a dedicated card might well be fine.

Takeaway: Our older Macs with integrated graphics were unable to even approach the Playable range with our default settings and lowering those settings to the minimum didn’t move the needle enough to put this game close to Playable range. Sorry, you’re out of luck with this one.

Bottom line: Ark: Survival Evolved is demanding on hardware and does not seem to be well optimized for Macs. You’ll need a computer with a dedicated graphics card to get the most out of this game. A newer (last 2-3 years) Mac with integrated graphics should be able to make Ark playable but at low graphics settings.

Perhaps Rust, the other big MacOS survival shooter, will be better optimized. We shall see in an upcoming Performance review…

Note: While Metal support was said to be coming to Ark, the last mention of that was in December of 2016; repeated requests for updates have gone unanswered.

Survival Evolved is available for download from all the major digital stores including Steam and Humble Bundle.