The game has received excellent reviews from both the press and users, confirming it is a worthy successor. But as usual, we’re here to help you figure out if your Mac can run one of the best-looking adventure games on Mac?

Fans of the series will find what they expect here: Lara’s bow will be an important weapon, there will be tombs to explore and battles to fight. But to keep things fresh, the developers have added more crafting and RPG elements to the game in addition to new gameplay modes.

As a new game in a popular series, we know you want to find out ASAP if your Mac can run it. Let’s get started.

Using the familiar third-person perspective, in RotTR Lara starts out in Siberia searching for a lost city that holds the promise of immortality.

With an 86/100 Metascore and an impressive 93% positive reviews from 26,000 users on Steam, Rise of the Tomb Raider is a safe bet for fans of the series or those looking for a new action/adventure game to try:

Softpedia’s perspective is a popular one:

Rise of the Tomb Raider successfully reiterates the success of its predecessor by updating and upgrading quite a few different things, like combat, crafting, or RPG mechanics, while improving the environmental design and the general flow of the campaign.

In many ways, Rise of the Tomb Raider is peak sequel design: an incredibly similar game with a set of expanded and additional systems. But RotTR is also better because it lets you spend more time engaging with those systems.

Bottom line: If you’re a fan of the series or are into action-packed adventure games, Rise of the Tomb Raider is the game for you.

Pro Tip: If you’re looking for an action-packed adventure game better suited for a MacBook, you need to check out our Cuphead Mac review. 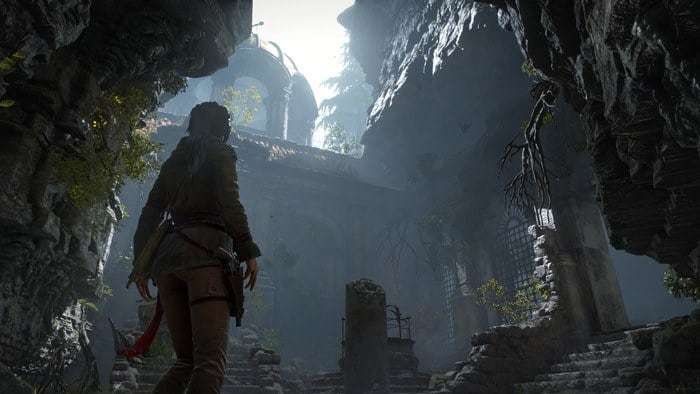 Sometimes you can still play a game even if your machine doesn’t officially meet the minimum system requirements. Not today.

Unless you have a recent top-of-the-line machine, you need to pay special attention to Rise of the Tomb Raider Mac system requirements:

The game will be supported on the following Macs:

And if these are too high for you, you can always check the still relevant Tomb Raider.

The Test: Can you play Rise of the Tomb Raider on Mac?

There’s only one way to figure out how demanding this game really is. We tested the game on as many machines as we could find in such a short notice:

Why these machines? We want these tests to be as helpful as possible, and for that, they need to be as close as possible to the Mac you have at home. For that reason, we strive to test a big variety of machines. We always do our best to cover the following setups:

These are the settings we used:

We tested the game simply using the in-game benchmark tool.

Why these settings? For the sake of having results that can be compared, all of our tests are done using the same settings. And as most of us have Macs with integrated graphics, we use settings (Medium) that are acceptable for the average gamer without being too demanding.

Feral Interactive clearly knows how to do a Mac port. But they can’t do miracles. A great looking game will always be a demanding game…

Given how smoothly the previous Tomb Raider ran, we expected this to be more demanding but still manageable. We were somewhat right.

Keep in mind that in the case of the 2017 and 2017 13-inch MBPs, our test settings (Medium) are significantly higher than the custom settings the game will automatically use to provide the best possible results.

Can my Mac run Rise of the Tomb Raider?

A high-end Mac can, of course, handle this game without a problem. Our 2017 15-inch MacBook Pro, can run this game at a Smooth 48.7 FPS. That’s a good result but, for the fastest Apple laptop available, it isn’t that high and leaves little margin to push settings or resolution much higher. It’s a similar story for our 2014 27-inch iMac and its Smooth 51.5 FPS.

Our 2017 iMac, on the other hand, can run it at a Very Smooth 103 FPS. If you have something like that, go ahead, increase the game’s resolution and enjoy the game’s impressive graphics!

Our tester ikir went ahead and pushed all the settings to the max (while keeping VSync Off) and the resolution all the way to 4K and still achieved a Smooth 53.33 FPS. In case it wasn’t clear before, eGPUs are a game changer, making 4K gaming a reality for an entry-level 13-inch MBP.

As a rule of thumb, if you have to choose between increasing the settings or the resolution, go with the resolution. Notice that playing with the settings, going from Medium to Very High won’t result in a jaw-dropping improvement.

Takeaway: A high-end Mac will do just fine, but if you have a MacBook Pro, don’t expect to play this game at the highest settings and resolution. Unless you have an eGPU that is.

Can you play Rise of the Tomb Raider on a MacBook Pro?

This is when things get tricky. Feral Interactive official supports the following integrated graphics cards: Intel Iris Graphics 540 or better.

When using running the game using the default settings defined by Feral, our 2016 13-inch MBP runs at a Borderline  24.71 FPS. When using the Very Low settings, it runs at a Playable 24.71 FPS. These machines can run the game, but only at the lowest (or close to lowest) settings. If you’re ok with giving up on all the bells and whistles, Rise of the Tomb Raider can be enjoyed, providing a nice and fluid gameplay experience.

On the plus side, the lowest settings show less detail, of course, but they don’t look too bad:

Using our official test settings (Medium), our 2016 13-inch MBP runs the game at an Unplayable 16.46 FPS while our 2017 13-inch MBP can run it at a slightly improved, almost Borderline 19.4 FPS. In these cases, you will clearly want to stick to Feral’s default settings.

Takeaway: Entry-level Macs can get the job done, but only if you’re willing to play on low settings. If you have a recent entry-level Mac, make sure you double checked the system requirements first…

I’m afraid this section will be very short. If you have an older Mac not officially supported by Feral Interactive, the game won’t even launch:

And in some cases, the game may launch, but the experience will be completely unreliable. We can launch the game on our 2014 Mac Mini, but we couldn’t even finish the in-game benchmark before experiencing system-wide crashes (forcing us to restart the machine).

Takeaway: Feral has been very thorough with their system requirements. Do not buy it if your machine does not meet them. Simple as that.

Rise of the Tomb Raider is available for download from several digital stores including Steam and Humble Bundle: