The first Pillars of Eternity was a success from the moment it was revealed. The game broke records on Kickstarter and raised nearly $4 Million. And that was only the beginning. Once released, it easily earned a spot among the best RPG games for Mac.

You can rest assured, Pillars of Eternity 2: Deadfire (PoE2) is the real deal.  Developer Obsidian not only created a worthy successor, but it also improved upon everything the original game did. But can you run it?

PoE 2 is still an old-school game, reminiscent of the golden age of classic RPGs, but plays better, looks better and has brand-new naval combat.

With an impressive 90/100 Metascore and an 83% Very Positive Steam user reviews, critics and gamers alike agree this is an excellent role-playing game.

Perhaps not ideal for gamers looking for a lot of combat and action (I’m usually part of that group), PoE2 might just be perfect for those wanting to immerse themselves in a fascinating world and quality roleplaying.

The game’s pausable real-time combat is stronger than ever, there are plenty of character-defining choices, and overall, so much to do. You can easily get lost in the countless stories that fill the PoE universe.

If it’s a fantasy RPG filled with pages of brilliant, descriptive dialogue you’re after, and a huge, open world to explore, the Deadfire Archipelago delivers all that and then some.

And PoE2 also has the looks. IGN does a good job highlighting how great PoE2’s graphics and art style are:

The water textures and lighting are some of the best I’ve seen in isometric RPGs, and the jungles and deserts are so well done that when my companion character complains about sand getting into unmentionable places, I believe them.

I could go on and on about the game’s features, story, and lore, but there are more than enough reviews that do it better than I ever will. Instead, I’ll focus on an important question no one else is taking the time to answer:

Can your Mac run Pillars of Eternity 2?

Before diving into the game, you should know that many gamers have experienced a game-breaking bug that prevents them from starting a game. Luckily, Obsidian quickly pushed out a Mac-only patch that is now part of the base game. This is a problem you shouldn’t worry about anymore.

These are Pillars of Eternity 2 Mac system requirements:

Pay special attention to these. If you ever have a problem and your Mac is not support, Obsidian won’t be able to help you.

The Test: Can you play Pillars of Eternity 2 on Mac?

As always, we test the game on several machines to see what it takes to run it on macOS:

Notice neither the 2012 MacBook Pro nor the 2013 MacBook Pro are officially supported. Pay special attention to the system requirements.

Why these machines? To make these reviews as useful as possible, we strive to test a wide variety of machines, including high-end iMacs, recent but entry-level MacBooks and older models too.

These are the settings we used on each machine:

We used our in-house benchmark tool while playing one of the game’s early missions. 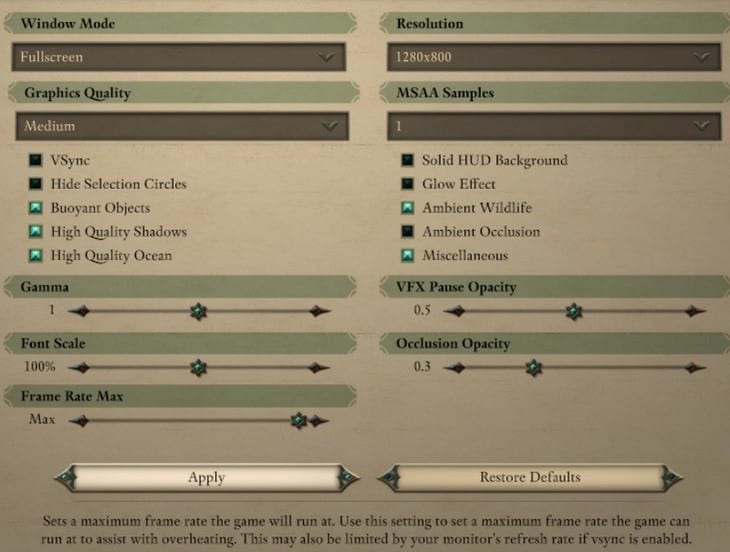 ⚠ Notice these settings aren’t particularly high. As most of us have older or entry-level MacBook Pros, we prefer to use settings that are acceptable for the average gamer without being too demanding.

This how each of our machines runs the game:

Let’s dig a little deeper into the results.
As a reminder, this is how we describe the different levels of performance:

Can my Mac run Pillars of Eternity 2?

This goes without saying but if your Mac has a powerful dedicated graphics card, you’ll be able to easily run this game on Medium settings. Our 27-inch iMac runs the game at a Very Smooth 85 FPS.

But why limit yourself to Medium settings? Let’s see how far we can push this game without losing too much performance.

Running the game on Medium settings and higher resolutions on that same iMac we get:

Pro Tip: If you have the choice between increasing the Quality settings or the resolution, opt for higher resolutions. Going from Low and Medium settings is noticeable, but not so much when going from Medium and High. Higher resolutions always look much better!

This image doesn’t give higher resolutions justice (because of its small size), but it can give you an idea of the improvement.

Takeaway: 4K will be a little too much for most Macs, but you can confidently increase the resolution and expect great looks and performance.

Can You Play Pillars of Eternity 2 On A MacBook Pro?

This is where it gets interesting. Macs with integrated graphics will always have limited gaming capabilities, no matter how new and expensive it is. But sometimes they can run some surprisingly demanding games.

Case in point, our 2016 13-inch MacBook Pro runs this game at a Borderline 23.7 FPS on Medium settings. Not amazing, but good enough, especially on slower games such as PoE 2. Turning the settings to Low gives us a Playable 33.7 FPS.

And for the record, Low settings don’t look too bad. You can see it for yourself.

Takeaway: Entry-level Macs can get the job done, but you’ll probably have to play on Low settings.

But is it all lost? Not necessarily. On Low settings, our 2013 MBP runs the game at a decent 26.1 FPS. That won’t impress anyone, but it’s just enough to enjoy the game.

Takeaway: If you have a Mac from 2013 onwards and are willing to play at the lowest settings, there’s a big chance you’ll be able to play this game. But if you can’t, you can always try the excellent story-driven RPG Star Wars: KOTOR 2.

Pillars of Eternity 2 is available for download from the most digital stores including Steam and Humble Bundle: