Is Apple killing Mac gaming? Believe it or not, this is a question developers and gamers seriously ask themselves every few months.

This concern gained momentum when Apple announced, during 2018’s WWDC, that OpenGL would be deprecated. And it only got worse with the confirmation that macOS Catalina, due this fall, will stop supporting 32-bit apps.

Both changes are officially happening but are they truly putting Mac gaming in danger?

It is undeniable that Mac gaming is going through a lot. Apple’s decisions to leave OpenGL and 32-bit apps behind will both have major consequences on Mac gaming… Just not in the way most media outlets want you to believe.

Is OpenGL the end of Mac gaming?

Apps built using OpenGL and OpenCL will continue to run in macOS 10.14, but these legacy technologies are deprecated in macOS 10.14. Games and graphics-intensive apps that use OpenGL should now adopt Metal.

As pointed out by industry experts, that was Apple’s first step to officially kill OpenGL and that could have serious ramifications for Mac gaming. Many went so far as to say it will eventually kill Mac gaming. 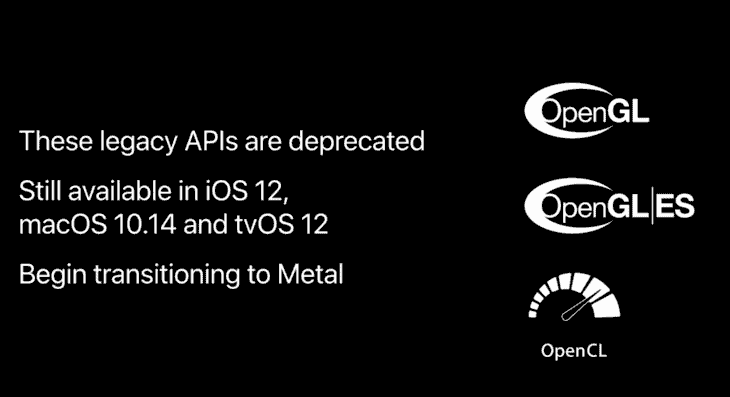 Twitter was taken over with variations of that hypothesis:

So fellow #gamedev folks, who else is gonna drop Mac support like a bad habit if they follow through on the #OpenGLpocalypse ?

The internet loves drama and people love to hate Apple. This explains why many were so quick to call for the death of Mac gaming. But to set the record straight, we reached out to developers that both:

They all came to a similar conclusion: Mac gaming will be just fine.

⚠ Keep in mind this is the personal opinion of developers, not official statements from the companies they are part of.

First of all, OpenGL is not dead

For those unfamiliar with development jargon, deprecated means the feature will continue to work, but will no longer be supported moving forward. Deprecated does not mean removed.

To be fair, Apple stopped supporting OpenGL years ago, and if the past is of any indication, OpenGL will continue to work for a few more years:

OpenGL has not been updated on macOS for 7 years at least. Deprecated does not mean removed. 10.14 will have the same drivers and support 10.13 had. Not sure what all this fuss is about. They are just making clear they will not update OpenGL, which was obvious at this point.

And by the way, Matteo Bertello works for one of the top Mac porting companies. He understands how MacOS works and knows what he’s talking about.

Raymond Doerr, the developer behind Rise to Ruins concurs:

Assuming the code only remains deprecated and *not* removed, no, I don’t think it’ll hurt anything at all. […] Anyone who needs even-newer OpenGL standards will also have the manpower to support Metal.

Another developer, who preferred to remain anonymous (but is behind one of the most popular strategy games released last year), agrees:

OpenGL is not going anywhere, it’s more like Apple are officially admitting they won’t be advancing it – which they haven’t, for many years.

This means the short-term is safe and developers can continue selling OpenGL games for Mac. But what will happen when Apple eventually kills OpenGL in 4 or 5 years?

Can Metal take Mac gaming to the next level?

The need to move away from OpenGL will encourage developers to adopt Apple’s Metal API faster. And that’s a good thing.

Metal was introduced as a set of 3D tools that would optimize GPU usage and maximize the graphics potential of your Mac. It sounded like a dream come true for gamers and developers alike, the thing that could take Mac gaming to the next level.

To better understand how important Metal is for Mac gaming, we sat down with Andy Wood, Head of Commercial at Feral Interactive, to ask a few questions:

Would you say Apple’s aging OpenGL is starting to be a real problem for developers?

A: It has been a challenge to work with OpenGL for some years now, especially with the advent of new graphics technologies. For example, we weren’t able to release F1 2015 on Mac because OpenGL didn’t have the necessary features. But don’t worry, we have some racing projects planned to make up for that!

Would you say these new features will make Metal much easier to use for development?

A: It’s not about making development easier exactly, but the new features in Metal certainly make more games feasible on Mac. Without these features, many modern games just wouldn’t be viable. With Metal, we have much more possibilities to bring them to the Mac with good performance. 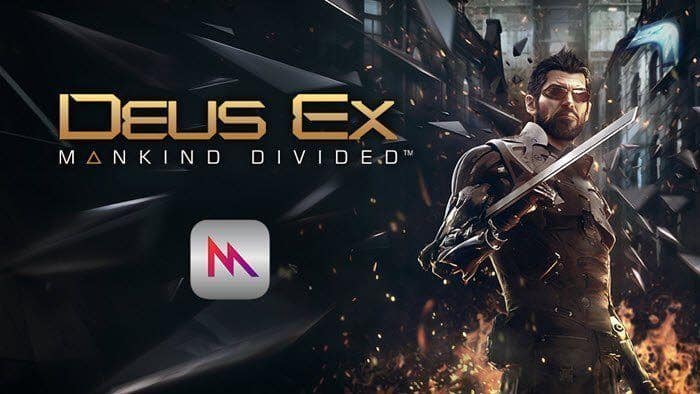 And it makes sense. OpenGL on Mac was in a such a bad state, it was hurting Mac gaming. Do you remember all the games that were on hold because OpenGL was too old to support critical features?

Platon Fomichev from Elverils, a studio specialized in porting games to several platforms, agrees that moving away from OpenGL towards Metal is a good thing:

Metal is cool for Mac/iOS but it’s a closed source thing. But one thing you should keep in mind. OpenGL/Metal/Vulkan, it really does not matter as long as renderer components are separated in a small component. […]

The renderer component is 5% of code of the game! Even less. So porting DX->Metal is very easy as long as MTL has enough capabilities.

If you want to learn more about Metal, this video from Apple is an excellent introduction for non-programmers. We also list all the games currently using Metal here.

But what about the smaller indies?

This is where removing OpenGL could become an issue, especially for the indie devs who use proprietary engines. Raymond Doerr was clear:

If they remove OpenGL entirely I’d sadly have no choice but to drop support. It’s just not realistic to be a one-man dev and support two entirely different rendering APIs in my custom engines.

They’re asking developers to dedicate their time to an entirely new API only used by one OS with a very small market share (3-4% of my total sales last I checked). It’s simply too time expensive to support, many developers will just drop support entirely.

If you’re a one-man dev (or a very small team) with a proprietary engine, the end of OpenGL could mean the end of supporting the Mac platform. But OpenGL still has a few years left.

And even for smaller indies, there are solutions.

Engines such as Unreal or Unity are more than ready for the end of OpenGL on Mac. Aras Pranckevicius, a Unity employee, shared his personal opinion with us:

This might affect niche/indie games somewhat more — on the other hand, quite likely many of them already use Unity or Unreal as their engine, so updating to Metal “should” be easy.

Unity will keep on supporting Mac platform for sure. We already have supported Metal on both iOS & macOS for quite some time.

If you’re an indie and use Unreal or Unity, the heavy lifting will be done for you and your games will support Metal without requiring much more work from you.

That said, already released games are a different story. Aras does warn that:

It might mean that some of the games that have shipped some years ago and have never been updated, will stop working. But they might also stop working due to Apple dropping 32-bit support.

I personally will be sad if some of my existing game catalog will stop working. Will they get updated to 64-bit and to Metal from OpenGL? I don’t know. I hope they will!

And there’s also the Vulkan alternative.

What about Vulkan and MoltenVK?

Seen by many as the future of PC gaming, Vulkan is an open-source API that promises better graphics performance and easier multi-platform development.

Initially, Apple decided to drop Vulkan and focus all its energy on the Metal API, but recently the Khronos Group and Valve released MoltenVK, a third-party tool to allow bring Vulkan games to macOS.

In theory, that could be a great alternative to support Mac, Windows, and Linux simultaneously. Even Valve used it to make Dota 2’s Mac version up to 50% faster than before. 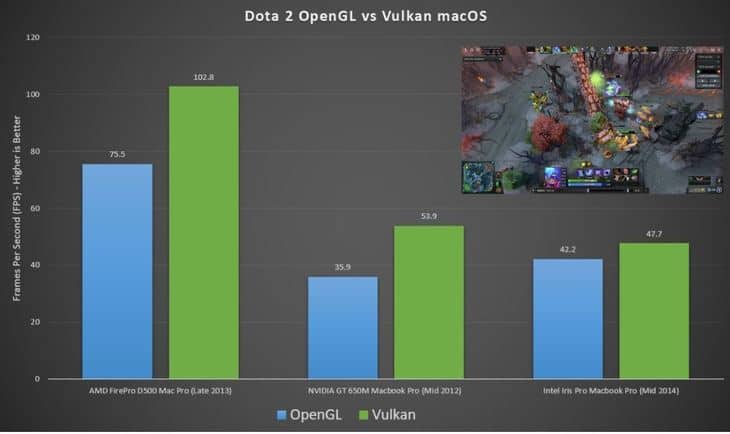 These efforts are aimed toward reducing development and porting costs for any developer supporting multiple platforms.

According to Khronos President, Neil Trevett, developers will be able to bring their Vulkan-based applications to macOS and iOS with very little or no re-writing of the GPU compute and rendering functionality.

But according to Raymond Doerr, the reality isn’t that simple:

Using Vulkan (and thus, Molten) is completely out of the question for indies. I love Vulkan and I’m trying to learn but it’s a huge beast. It takes about 1,000 lines of code to draw a triangle in Vulkan (not exaggerating!), it takes about 15-20ish in OpenGL depending on what OGL version you use.

While I love Vulkan, it just isn’t viable for us little guys at the moment.

Between Metal, MoltenVK and the fact OpenGL still has a few years to go, we can safely assume OpenGL’s deprecation is not a real threat.

Unfortunately, there is a much bigger threat than the end of OpenGL…

With macOS Catalina, due this fall, Apple will officially end support of 32-bit apps and games. As a direct consequence, all games not updated to 64-bit will stop working if you upgrade to Catalina.

This is far more dangerous than OpenGL’s deprecation. In fact, the consequences can already be seen. Both Aspyr and Feral Interactive have officially listed the games they won’t be updating to 64-bit. And that is only the beginning…

Hundreds of 32-bit games will not be updated and will become unplayable. This will mostly affect older games. Still, fewer Mac games is bad for everyone. In case you’re wondering about what games have been discontinued and are still 32-bit, you can check our massive list of 32-bit Mac games.

With everything that has been said regarding the death of Mac gaming, we had to set the record straight.

With all due respect, the radical opinions of unknown one-man developers are not representative of how the industry will react. Some of the developers we talked to agree that in certain cases, some games won’t be supported when OpenGL is finally removed.

But that won’t happen anytime soon. And more importantly, the vast majority of the major indies and AAA studios believe that moving away from OpenGL on Mac will be a good thing. If anything, Mac gaming will suffer from the end of 32-bit apps support…

But as Michael Blair from Aspyr told us:

We’ve been here before, and this is definitely not the end of Mac gaming.