Update: Apple’s intention to kill the iTunes affiliate program was first hinted in May 2017 when they announced plans to drastically reduce Apps commissions. After strong backlash from the community, Apple reverted its position and the entire issue was dismissed as a “misunderstanding”.

But it clearly wasn’t. In August 2018, Apple officially announced plans to kill the entire affiliate program for macOS and iOS apps. The change came into effect in October 1st, 2018, effectively killing the revenue of hundreds of sites, including Mac Gamer HQ.

It seems there has been a big misunderstanding.

Two weeks Apple shocked the press with the announcement that commissions for all app and in-app content would be reduced from 7% to 2.5%, effective May 1st.

A huge change that would deeply affect all sites that spend much of their day covering, reviewing or benchmarking macOS and iOS apps, including Mac games.

And by merely giving a one week notice, some wondered what was Apple’s plan here.

As officially announced by Apple:

Starting on May 1st 2017, commissions for all app and in-app content will be reduced from 7% to 2.5% globally. All other content types (music, movies, books, and TV) will remain at the current 7% commission rate in all markets. We will also continue to pay affiliate commissions on Apple Music memberships so there are many ways to earn commissions with the program.

The message is crystal clear, yet it seems that wasn’t exactly what Apple meant.

Because I never saw a clear mention of Mac Apps, I decided to contact the iTunes Affiliate team. Turns out, not only are Mac Apps not impacted. iOS Apps aren’t impacted either.

The change in affiliate commissions applies to in-app purchases only, at least according to their support team: 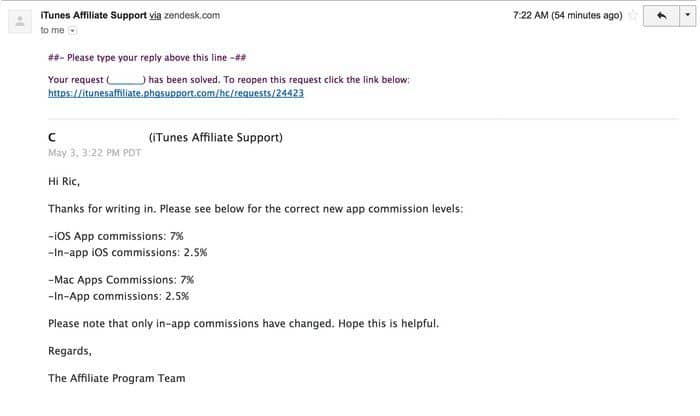 This also matches what some have noticed now that May has started. They still see 7% commissions:

Still seeing 7% commissions for iTunes affiliate links from May 1-May 2 ????

(Maybe dashboard is slow to catch up?)

@MacGamerHQ @viticci I’m still get 7% commissions on iOS apps though ????

And in fact, I still see the same commissions from my gaming reviews. I suggest Apple clarifies that all app commissions remain unchanged and stops the panic among bloggers and app reviewers.