The latest in the high powered F1 series by Codemasters, F1 2017 is as good as it gets for any sim racer fans. Bringing back the much loved classic F1 cars, the 2017 iteration of the franchise builds upon the success of its predecessor and ups the ante in every way. It’s no surprise this game earned a spot among our favorite racing games for Mac.

The much-improved graphics and more accurate physics promise higher immersion than ever before. The best news of all? The Mac version was launched on the same day as other platforms thanks to the hard work of our friends over at Feral Interactive.

F1 2017 also heralded the beginning of the F1 eSports series, and the beauty of this competition is that it’s open to anyone who has a copy of the game. Of course, to have a competitive chance of winning, having consistently high frame rates is absolutely critical.

Let’s see how your Mac stands up to the rigors of this game, and whether your machine can pilot you to the winning leagues.

And as we always do, we will be testing the game on several different Macs, with a focus on higher-end models.

Every iteration of the F1 game franchise has been better than the last, but is it worth spending the extra dough, when the previous edition was already a fantastic game?

Luckily for me, the answer was easy this time around. And it’s not just me, everyone is impressed with the improvements over its predecessor.

The adoration for this game is clearly visible in the tsunami of positive reviews it has received since launch. A Metacritic score of 89/100 and 85% positive reviews (from 2,400 reviews) on Steam isn’t something to sneeze at. You really can’t go wrong with this game.

The chaps over at IGN sum it up pretty succinctly:

Rich with details and faithful to just about everything that makes contemporary F1 tick, F1 2017 is about as good a simulation of a single, modern motorsport as you can get.

Whereas our contemporaries at Ars Technica have a slightly longer take on it:

The game will keep such gamers busy for weeks with both Career and Championship modes. In fact, just the addition of the classic cars to the game is probably reason enough for someone to pick up a copy. But even then, I think you’ll find it engaging.

If you were ever waiting to get into the franchise, now is the time. If your Mac allows it… 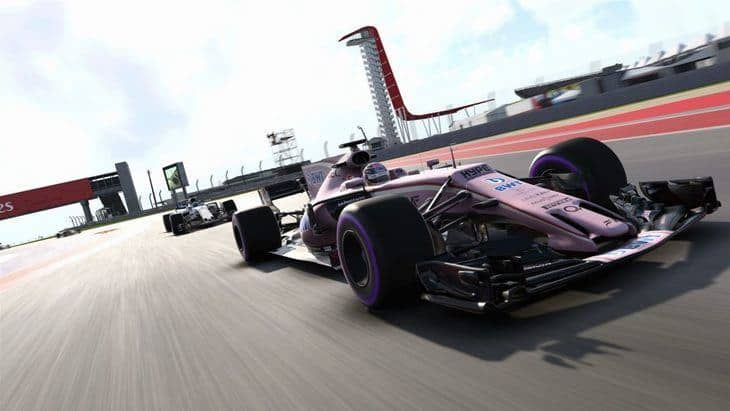 This is particularly important for extremely demanding games such as this one. If you don’t have a high-end Mac, you’d be wise to pay extra attention to the game’s requirements.

The game is supported on the following Macs (to check your Mac model, select About This Mac from the Apple menu on your menu bar):

Also, note that in multiplayer you will need a good internet connection to keep you from losing those dogfights where even a millisecond of lag could adversely affect your results.

Into Racing games? These are our favorites:

F1 2017 has some pretty hefty system requirements, and only the latest Macs are fit to play it. However, let’s see how much we can bend these rules.

Notice neither the 2013 MacBook Pro and the 2014 Mac Mini are officially supported.

Why these machines? Our purpose is to help you understand how well this game runs on different setups. And hopefully, one of these setups will be similar enough to yours to give you a clear idea of what to expect. We usually have a more varied selection of hardware but as this is a highly demanding game, we will focus on high-end models this time:

These are the settings we used to test F1 2017 using the game’s internal benchmark for 1 lap around Australia in Heavy Rain conditions.

Why these settings? Australia is a tight street circuit so that lots of traffic to would be rendered simultaneously, and the particle system from the Heavy Rain conditions will push the demands of the game to the max.

But remember, we are testing vastly different machines. Some high-end, some not. 1280×800 and Medium settings won’t impress anyone, but they are acceptable and should meet the requirements of the average gamer. Especially in F1 2017, where the final output will largely look the same on 720p or 4K unless you bump the graphics settings all the way up. 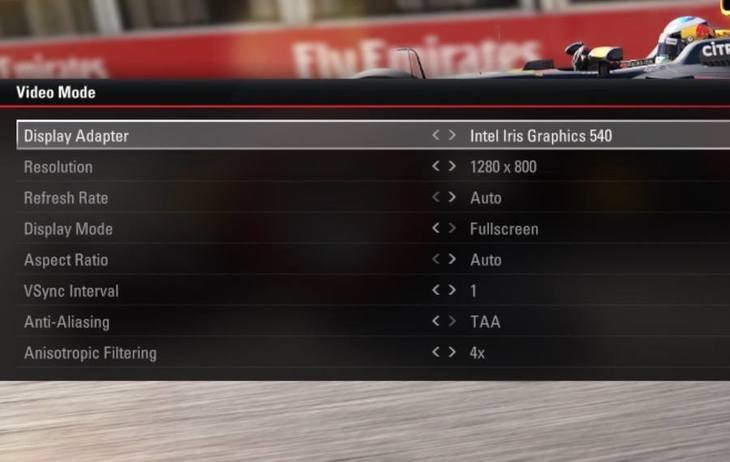 We knew going in that the hardware requirements for F1 2017 were challenging on the Mac side, and our results confirm that.

Recent Macs with dedicated graphics cards had no trouble with the game at our default setting, but any Macs that failed to meet the minimum requirements refused to play the game.

Beware of this limitation, and only get this game if your Mac meets the minimum requirements.

This is certainly a choice Feral took to maintain a consistent framerate. While this decision is understandable, we’d prefer the game to allow more powerful Macs to express themselves through higher framerates, allowing competitive players to gain an advantage in multiplayer games.

We usually aim for at least 30 FPS.

There’s no doubt that a high-end Mac which meets the listed minimum requirements can play this game at our default settings. Locked frame rates of 60 FPS put our iMac and 2017 15-inch MacBook Pro at the top end of the Smooth range.

This is what can be expected when turning the settings to Ultra High (and 1280×800):

Takeaway: If you have a high-end Mac, you can expect to play this game at the Medium settings without a problem, and you can probably bump things up a bit, on both the resolution and settings and still have a silky smooth experience.

And you would surely have an even better experience on powerful Macs such as the iMac Pro., but with frames locked at 60 FPS, that would be overkill.

The waters are a little murky here, as you’d expect, but it’s not too bad. Our 2017 13-inch MacBook Pro was nearly Playable at 29 FPS with our default settings.

The 2016 version of the same machine suffered some performance degradation, slotting into the Borderline category with 25 FPS. It’s definitely not ideal, and you will find some more joy by turning down the settings, but don’t expect to hit any big FPS numbers.

Takeaway: If you have a newer Mac with an integrated chipset you may find the game playable. We hit Playable on a 2017 13-inch MacBook Pro with our default settings.

Although it should be said that there’s no harm in turning down the resolution and settings for higher FPS numbers, as the game itself is pretty solid and you will definitely enjoy it, in spite of the relatively poor visuals as a tradeoff.

The short answer is, don’t even bother trying. The game will refuse to play, and it’ll just end in tears. The minimum requirements are not flexible, and the game will simply refuse to launch.

Takeaway: If your Mac does not meet the minimum requirements, you’re bang out of luck with this one. Sorry, but that’s how it is. There’s no negotiation on this front, and no amount of compromise, pleading, or prayers will work here

Remember, you can always run the free Unigine Heaven Benchmark using the Basic Preset and compare your results with ours:

Bottom line: F1 2017 is highly demanding, and despite the best efforts from the folks over at Feral Interactive, the game is not as well optimized as it is for the Windows PCs. Although it does have Metal support, it still requires a powerful Mac for any sort of playable experience.

F1 2017 can be downloaded from any of the major digital stores, including Steam and our favorite, Humble Bundle: