Total War games are famous for the scale of their battles. Hundreds of soldiers on a single battlefield is certainly impressive.

Add to that a deep gameplay that requires smart tactics and strategies and you get some of the best Strategy games for Mac. Warhammer is all that plus orcs, heroes, and other fantasy creatures.

But all those units and great graphics must require a powerful Mac to run right? No need to jump to conclusions, we are here to figure it out together.

Ready? Let’s see if your Mac has what it takes.

Released for Mac almost a year ago, there are more than enough reviews to give us an idea of the quality of this game.

With an impressive 86 Metascore (weighted average of scores given by critics), Warhammer can be considered a great game:

Reading what the big guns had to say, it certainly seems like this is a fun, satisfying and well-made game.

On the other hand (like it’s often the case) gamers were far more challenging than professional critics. The game has 75% positive reviews from over 21,000 total users. By Steam reviews standards, that’s a good score too.

Total War games are usually not for everyone. They feature campaigns full of accurate historical elements and battles that require a lot of thinking and strategy.

But with the introduction of a fantasy universe and monsters and griffons, Warhammer is a better Total War with more appeal to casual gamers.

Until Thrones of Britannia comes to MacOS, this is the Total War to have.

Remember, if you don’t pay attention to the system requirements, you risk buying a game you won’t be able to play!

These are Warhammer’s minimum system requirements:

The game is supported on the following graphics cards:

The following graphics cards are capable of running the game, but do not consistently meet the standards required for official support:

If you don’t have one of these, I’m afraid this game isn’t for you…

The Test: Can you play Total War: Warhammer on Mac?

I can confidently tell you this is a good game. But can your Mac run it? We went ahead and tested the game on the following Mac models:

As you can see, the purpose is to go wide and cover Macs that are as different from each other as possible. In this case, we have the:

Hopefully, your setup will closely match one of these.

Notice neither the 2012 MacBook Pro nor the 2014 Mac Mini are officially supported.

These are the settings we used to run the game’s internal benchmark :

Why 1280×800 and not more? Because most Mac users have slightly old MacBook Pros. 1280×800 is a little better than basic High Definition (720p), but still low enough to give MacBook Pros a chance… 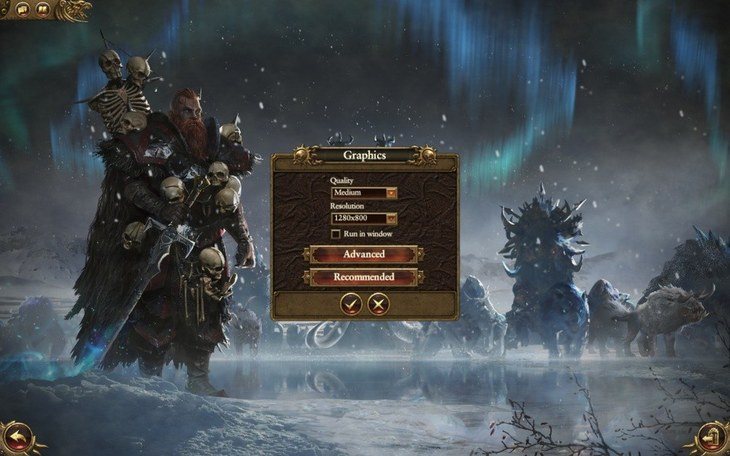 The Results: A pretty but demanding game

It goes without saying that this great looking game requires power to render those beautiful and chaotic battles.

We expected this game would be demanding. And we were not wrong:

Keeping in mind that we aim for 30 frames per second (FPS) or more, these results are discouraging for anyone but those with very powerful Macs.

Unlike turn-based games such as Civilization 6, Total War: Warhammer on Mac really shines during its huge real-time battles. Are 10-15 FPS enough to enjoy them?

We’ll have to take our tests a little further to answer that question. And the answer will obviously depend on your setup.

This one’s easy. If you have a high-end Mac (or a Mac with a dedicated graphics card and 2GB of Video RAM or more), TW: Warhammer will run beautifully on your machine.

In fact, you can confidently play the game at higher settings and resolutions and still have over 30FPS of smooth gameplay.

Can you play Total War: Warhammer on a MacBook Pro?

This is where it gets tricky. Looking only at the results, I’d be inclined to say you should not get this game. 15 FPS is much too low to enjoy a game.

But what if you’re prepared to compromise and play the game at lower settings?

Testing the game at the same resolution as before (1280×800), but using the Minimum settings, we got 23.0 FPS running the in-game benchmark. 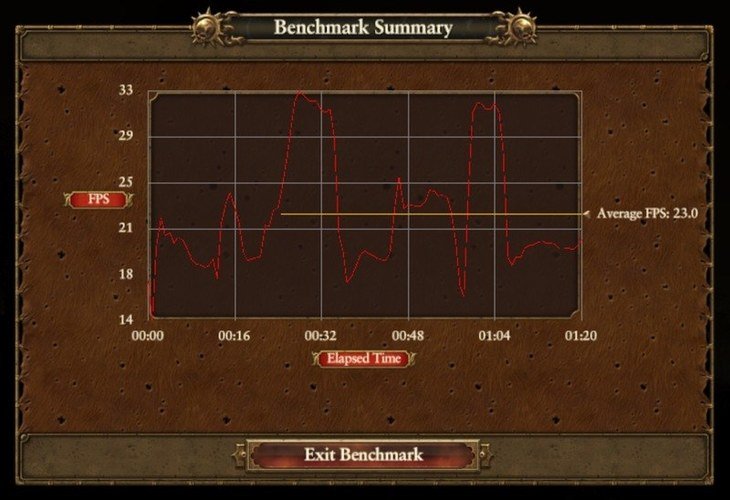 Still low, but barely enough to enjoy it.

But before you run out to purchase a copy, keep in mind that compromises are needed. If you need to play your games at 60 FPS and 4K, don’t bother.

If you want to enjoy the game at lower settings but decent performance, you can go ahead and buy it.

Do you have an older and basic Mac?

If you have anything older than our 2016 MacBook Pro with integrated graphics, I advise you pass on this game. Unfortunately, performance will be too low.

Bottom line: If you get anything lower than 12 FPS (like the 2016 MacBook Pro we tested), I wouldn’t recommend it

Total War: Warhammer is available from most digital stores and prices are stable across the board. You can really get it from your store of choice: