RimWorld is finally available for Mac

After five long years in development, space colony sim RimWorld is officially out.

The game has been available on Steam Early Access for so long, it was easy to forget it was still unfinished and in beta. That changed last week when developer Ludeon Studios officially released RimWorld for Mac, Windows, and Linux.

RimWorld reminds me a lot of Prison Architect, one of the finest simulation games for Mac. The graphics and top-down view are similar but instead of managing a maximum security prison, you’ll be in charge of an entire space colony.

In RimWorld, you’ll begin your adventure with three survivors shipwrecked on a randomly generated world. From there, you’ll have to manage your colonist needs, fight pirates and wild animals, build structures and weapons, trade with other colonies and much more.

You can download RimWorld for Mac on Humble Bundle.

While this final 1.0 version focuses on bugfixes, the game’s created promise more “creative content” in the future. We’ll see what that means in the coming months.

RimWorld is one of those games that has so much depth, it can get away with having simple graphics. RimWorld won’t impress anyone in the graphics department, but that’s ok because this game is about the countless systems and options it puts at your disposal.

Plus, those simple graphics mean you can play RimWorld on most Macs, even older ones with integrated graphics. 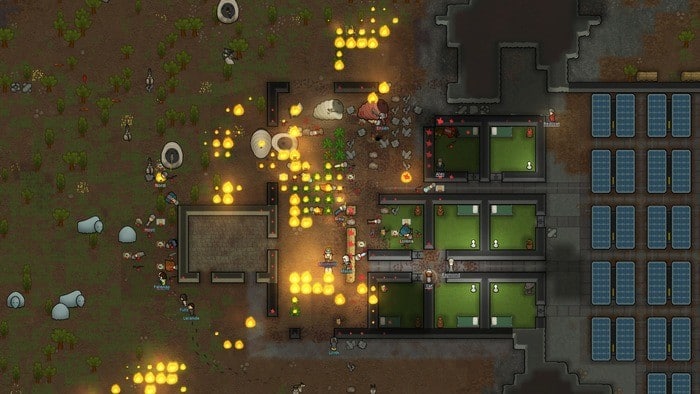 These are the game’s Mac system requirements:

I haven’t played the game in a long time but I’ll run a few benchmarks on my 2013 13-inch MacBook Pro and report soon.

Are you a fan of city-building or management games? Are you into sci-fi universes? Either way, RimWorld is a game I definitely recommend. After all, it spent 5-years taking feedback from the community and it shows.

You can download RimWorld for Mac on Humble Bundle.