Borderlands 3 is now available for Mac. The Mac game was released today, October 30, 2019.

Usually handled by Aspyr Media, Borderlands games on Mac are usually highly anticipated and closely followed by fans. This time, though, developer Gearbox suddenly dropped the news, without any prior mention of macOS support:

Borderlands 3 is now available on Mac!

As neither Aspyr nor Gearbox had never mentioned Mac support so far, we were certain that Borderlands for Mac would never happen. This makes it an even more pleasant surprise to suddenly receive the follow-up to one of our all-time favorite shooters for Mac.

The Borderlands franchise does not need an introduction. The first Borderlands basically created the looter shooter genre and the subsequent entries have refined. If you’re looking for an action-packed shooter full of weapons but also abilities and powers, look no further than Borderlands 3. And if you’re a superhero fan, watch The Boys and all the Marvel movies, you’ll feel oddly at home too.

The game is exclusively available on Epic Games.

The original shooter-looter returns, packing bazillions of guns and a mayhem-fueled adventure! Blast through new worlds & enemies and save your home from the most ruthless cult leaders in the galaxy.

These are the game’s official Mac system requirements:

Unlike its predecessor, this is a demanding game that will require a recent Mac with a dedicated graphics card to run. We will be testing it soon, stay tuned for the results.

For the time being, Borderlands 3 is only available on Epic Games. That said, you’ll still have to choose among the different versions available. Hopefully, this chart will help you decide: 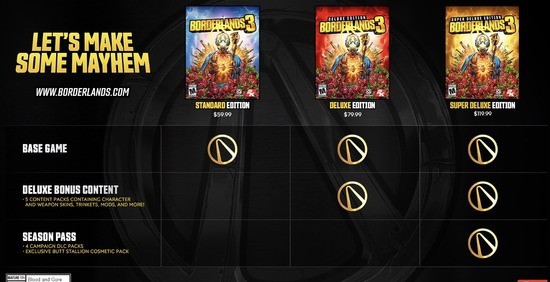 Are you a Borderlands fan? will you be getting this one?