Path of Exile has been competing with Diablo 3 on Windows for years, and Mac gamers finally have the chance to experience it and decide which one is the king of action RPGs for themselves.

Path of Exile for Mac is finally available!

Developer Grinding Gear Games released an experimental Mac version of the game on September 18, 2020. Slowly, the developer has been making improvements to the game and I’m happy to confirm the game is now officially available on Path of Exile’s Steam page:

Path of Exile on Mac: What to expect

Path of Exile is an action RPG set in a dark fantasy world. Its gameplay and aesthetics are very similar to Diablo 3’s but Path of Exile aims for an even bigger focus on visceral combat, powerful items, and deep character customization.

In many ways, Path of Exile feels more like a Diablo 2 sequel than Diablo 3. Whereas Diablo 3 is more geared towards casual players, Path of Exile is more demanding, punishing and complex. A little too complex for some, in fact. Also, Path of Exile is a more gritty and somber game, similar to Diablo 2.

Path of Exile is also completely free and its developer claims it will never become pay-to-win. With an 86 Metascore and 93% Very Positive reviews from over 118,000 users on Steam, you can’t go wrong with it.

And one more thing: I can confirm that the macOS version of the game is the same as on Windows and not the mobile version!

The game appears to be stable on Intel-based Macs.

Unfortunately, Path of Exile is currently not working on M1-based Macs. I have downloaded the game myself and tried to run it on my M1 MacBook Air and unfortunately, the game systematically crashes when trying to launch it: 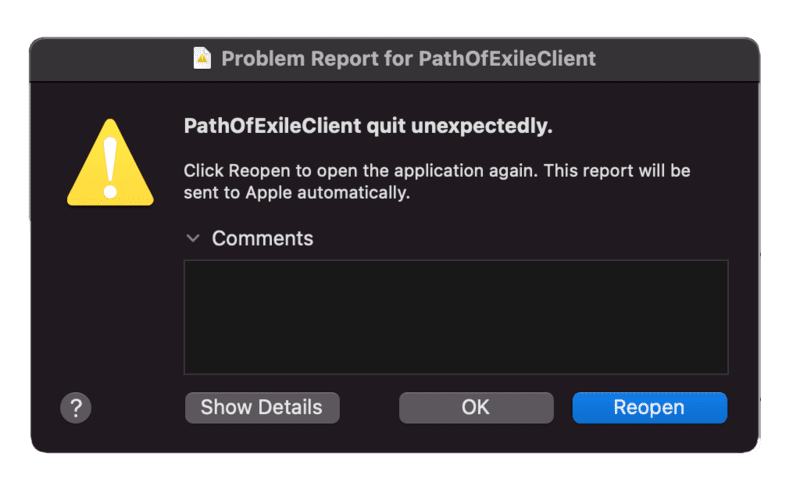 Hopefully, this will be resolved soon. We have reached out to the developer and will report back as soon as we hear from them. In the meantime, this page tracks all the other known Mac issues.

If, however, your Mac is a little too old to run this, you can try a more narrative-driven RPG such as Thronebreaker: The Witcher Tales.

Just as the Windows version of the game, you can download the game directly from Steam.

I’m personally excited about this game and cannot wait to finally play it on my Mac. What about you? Are you a Diablo fan? Will you be picking this one up?