We were so obsessed with Apple deprecating OpenGL (spoiler alert: nothing important actually happened), we missed the real issue looming on the horizon: the removal of 32-bit support.

It was with MacOS Catalina, released in October 2019, that Apple actually pulled the trigger and completely removed support for 32-bit applications. With that, upgrading to the latest macOS version meant giving up on hundreds of apps and games, including some you already owned.

To help you navigate these uncertain times, this page tracks all the Mac games we know that are still 32-bit (or that were 32-bit but were recently updated to 64-bit).

PS: New games (from 2019 onwards) are always 64-bit, therefore you won’t see us update this list with every new game released in 2021.

‼️ Some developers, such as Aspyr and Feral Interactive, were open about which of their back-catalog games wouldn’t be updated to 64-bit. But most never publicly communicated any plans.

32-bit games for Mac: Stay away from these

Lack of 32-bit support is now a normal part of owning a Mac, but it can still be a bad surprise whe you stumble upon a 32-bit game your Mac cannot run. This table tracks and covers the latest status of hundreds of games:

64-bit games for Mac: The future of Mac gaming

The removal of 32-bit support caught many by surprise. Many saw it as an aggressive move that hurt both consumers and developers alike and were quick to call out Apple.

Apple’s decision could be debated at length, but the move to 64-bit was a necessary move. Luckily, many developers were quick to react and on top of that, new games are 64-bit by default. This means there is a healthy quantity of 64-bit Mac games at your disposal.

These are the main reasons 32-bit games are behind us and most of us won’t even look back:

All the most popular games were quickly updated to 64-bit:

The most-used engines were updated to 64-bit

For example, games that use the Unity engine can be easily updated to 64-bit because Unity supports it. Notorious examples include Rust, Hearthstone, SUPERHOT and more.

But even more importantly, new Macs have been released with 64-bit-only macOS versions for years now.

32-bit games are gone for good…

Steam is an essential part of gaming on a Mac. Chances are most of your games are Steam. This is why Steam barely working on macOS Catalina was such a catastrophe.

But Steam’s issues with 64-bit on macOS is mostly now. Steam itself now fully supports 64-bit Macs and runs games as smoothly as it ever has. This page has all the information you need regarding 64-bit Steam for Mac.

The only issue remaining is Steam automatically adds warnings when games are still 32-bit and therefore not supported on the newest macOS version. 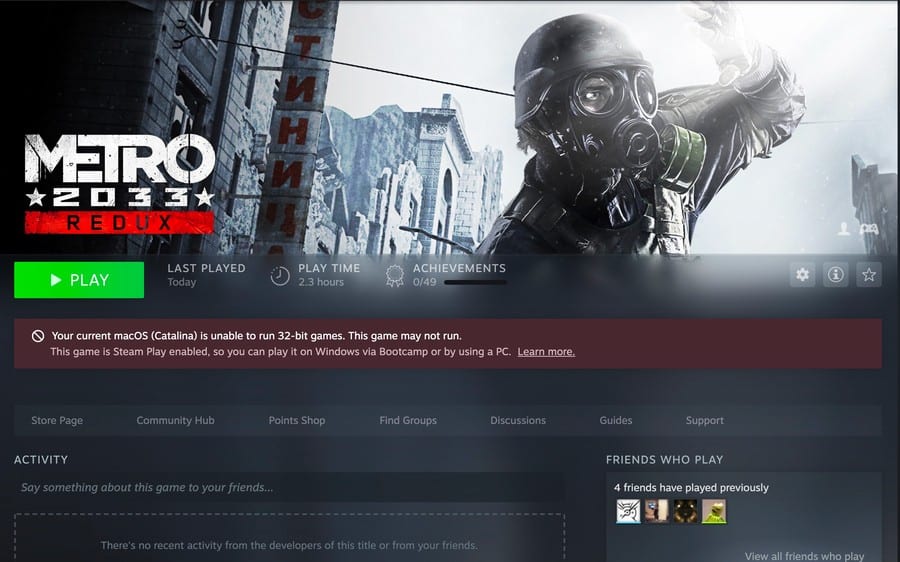 This should be a great feature but unfortunately, that information is often wrong. For example, as of today, Metro 2033 Redux is highlighted on Steam as a 32-bit game not supported on the latest macOS version. However, the game is 64-bit and can be installed and played on any Mac without a problem.

Steam’s 32-bit information is often inaccurate and should not be trusted.

As explained by Apple, finding out if a game supports 64-bit is easy:

When selecting an individual application, you will see a field titled 64-bit (Intel). “Yes” indicates 64-bit; “No” indicates 32-bit:

You can also use a handy tool called Go64. It’s free, it’s easier to use and it’s coming from St. Clair Software, a veteran Mac developer.

Once you’re done, you can share a screenshot such as the one above so we can update the list accordingly:

This is only the beginning

Keep in mind we have only covered games we have tested ourselves or games for which have received tests from members of the community.  There are still hundreds of games (from smaller indie teams for example) that have not been updated to 64-bits.

Always keep this in mind when purchasing a smaller indie game or an older game from a publisher’s back catalog. Use this information as a reference, but remember that we cannot spot and warned you about every single 32-bit game still out there.

This is why we have to help each other out. If you know about a game that is still 32-bit, let us know.

What if you really need a 32-bit app?

If one of your favorite games is part of the list above and you want to keep playing it for many more years, you can always hold off and not upgrade your Mac to macOS Catalina.

Having said that, Macs that are not updated to the latest macOS versions will eventually miss out on important new features and updates.

Are you worried some of your favorites games will no longer be supported? Let us know in the comments section.