Do you remember the times when you could only find Mac games at Apple Stores? It was generally on the bottom rack, where the boxes would just sit there and gather dust.

Nowadays, you can download them from nearly every digital store out there. If it offers Windows games, it probably offers Mac games too. Hell, you can even find free Mac games downloads when you know where to look.

Finding games is easy, but what about finding the best ones when they’re really cheap?

When you know where to look, you can find crazy deals out there, some going as far as 80% off.

This is how you can find them:

The top places where to download games for Mac

I can count at least 15 different alternatives from the top of my head. Having options is good, but it’s easy to get lost. This comparison table should help:

Now let’s take a closer look at the top stores out there: 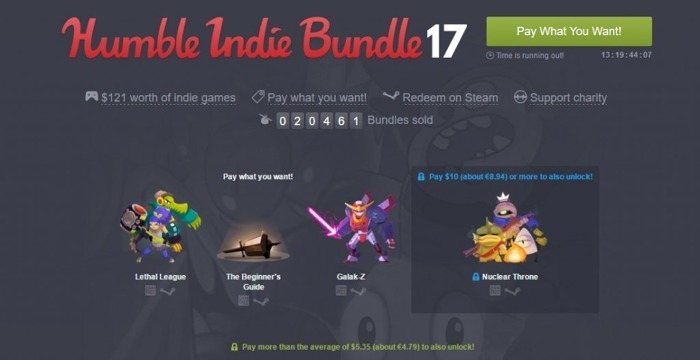 The Humble Indie Bundles happen every few months and are deals you cannot miss. Why? The Humble Store takes a handful of indie games and

The Humble Indie Bundles happen every few months and are deals you cannot miss. Why? The Humble Store takes a handful of indie games and asks you to simply pay what you want for them. You heard that right. The only catch is that some of the games can only be unlocked if you pay more than the average price paid so far. That usually means paying around $6 for at six to eight games, and as part of the price goes to a charity of your choice, it isn’t really a catch. Another great thing about the Humble Indie Bundles is that they mostly include  cross-platform games.

Pro tip: When you buy a game on Humble Bundle, it works on both macOS and Windows, in case you’re also looking to play Windows games on your Mac.

Another great thing about the Humble Indie Bundles is that they mostly include cross-platform games (Windows, Mac, and Linux) and in many cases, they surprised us with brand-new Mac ports no one expected (like Fez, Mark of the Ninja or Outlast).The Humble Store offers many more bundles, but often they lack Mac versions. The Humble Indie Bundle is the only one you should keep an eye out for.

The Humble Store offers many more bundles, but often they only include Windows versions. The Humble Indie Bundle is the only one you should keep an eye out for.

Strength: They offer the cheapest deals you could ever get.Weakness: The Humble Indie Bundles only happen every so often.

Weakness: The Humble Indie Bundles only happen every so often. 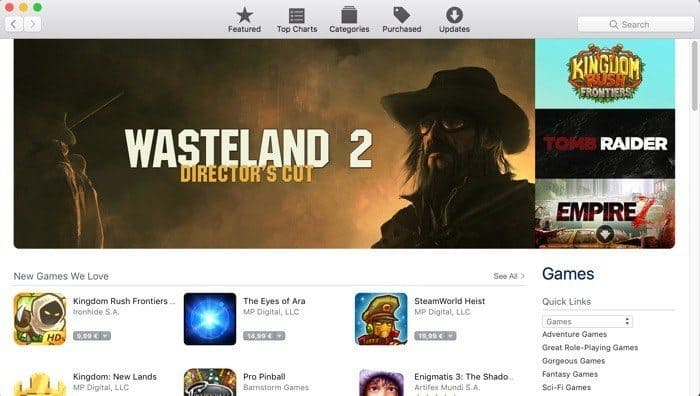 Apple’s Mac App Store (MAS) is my number one recommendation to find and buy Mac games. Why? Because it’s already installed on your machine. And also because it’s the easiest and fastest way to buy games.

Sure, you can easily buy stuff from other stores, but the MAS will also automatically download, install, and update your games.

This may not sound like much, but once a reader told me she didn’t play games on her Mac because Steam was too difficult to use. This is why the MAS’s ease of use is so important. More experienced gamers may prefer some of the other stores listed below, but if you want simplicity, the MAS is the way to go.

And to top it all off, it features great deals, a few free downloads for Mac, and best-sellers such as BioShock Infinite or Company of Heroes 2.

Strength: The fastest and easiest way to buy and download games on MacOS. 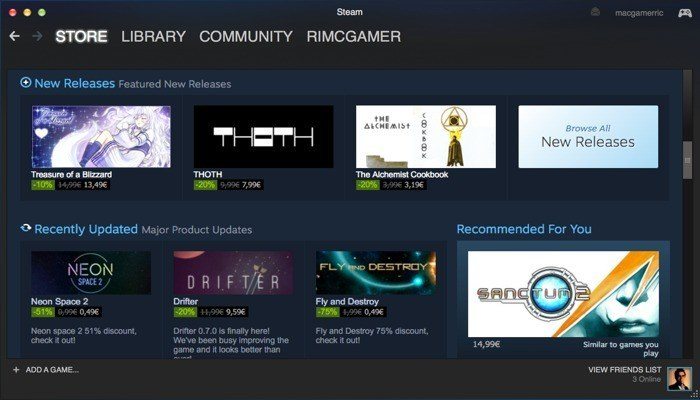 Steam is the most popular digital store among serious gamers and the last time I checked, it had over 4,000 Mac games.

Steam will force you to use their client to buy and download games. The MacOS version is kind of buggy and ugly, but in their defense, it offers killer features such as chat, friends lists, a forum, and tons of multiplayer features.

Steam is also known for their outrageous sales, making people compulsively buy more that they could ever play. Their Winter and Summer sales offer discounts up to 80% off! But their best feature, called Steam-Play, lets you buy a game once and get both Windows and Mac versions. This is obviously only possible for games that support both versions, and in some weird cases, different versions are sold separately (I’m looking at you Call of Duty Black Ops).

Still, Steam-Play is a great feature and sometimes it supports cross-platform multiplayer between Mac, Windows and sometimes even with Linux. This can be a lifesaver, as Mac only multiplayer can get lonely, but having access to the millions of Windows players is a game-changer. If you’re really into Multiplayer, Steam is the way the go.

Finally, Steam includes some of the best free games out there, such as Team Fortress 2 or Dota 2.

Weakness: You’re forced to use their client. 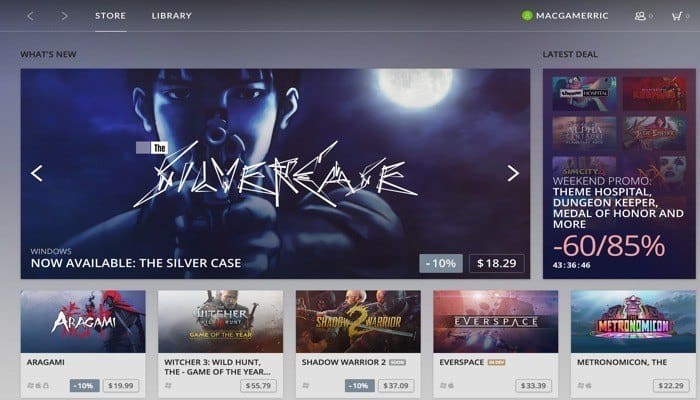 GOG.com is the store I try to use more and more. Why? Because they work hard to offer DRM-free games exclusively. And that alone deserves some of my cash. What is DRM?

What is DRM? In short, Digital Rights Management refers to tools created to prevent people from pirating games. I have nothing against fighting piracy, but sometimes DRM can become so obtrusive, it end ups hurting the experience of those who did pay for the game.

To you, DRM-free means you can buy your game and do whatever you want with it. No anti-piracy measures, no restrictions, no hassle.

Previously called Good Old Games, GOG specializes in old-school games, creating digital updated versions to bring them back to life. Thanks to GOG we can once more enjoy Planetscape: Torment or Theme Hospital. GOG is still the best at that and now they offer modern indie games too.

GOG’s gamer-focus doesn’t stop with their DRM-free catalog. They also have high-quality standards, a good support team, and a great community. They also give you all available versions of a game at no extra charge. If you buy a game that is available on Mac, Windows, and Linux, you’ll automatically get them all. Finally, their Galaxy client is great and offers online Multiplayer, achievements, chat and more.

Weakness: Their catalog is quite small, but that makes sense as they only offer indies and old-school games. 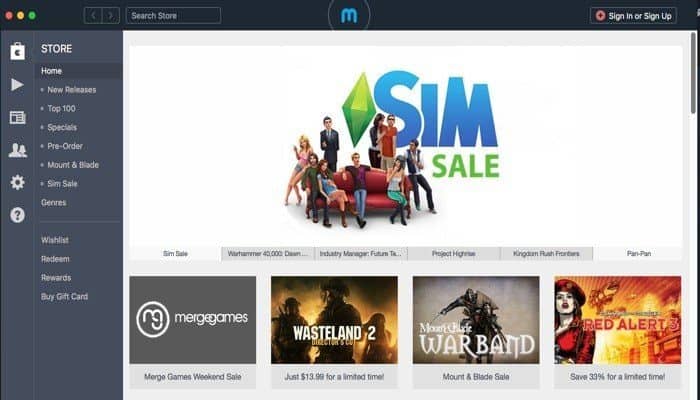 Not to be confused with Apple’s Mac App Store, MacGameStore is a third-party store that focuses exclusively on Mac games.

The MacGameStore has been around since 2005 and their experience shows. You can buy games directly from their website or you can use their very useful app. Both methods are good, but their app offers a compatibility checker (comparing your machine’s specs against games’ system requirements) and automatic updates. No more buying games just to later find out that your machine can’t play them!

The app is a plus, but what I like the most about the MacGameStore is their huge catalog. They have a few games you can’t find everywhere, such as The Elder Scrolls Online. And in some cases, they even offer Steam keys, which let you download the game on Steam and get the benefits all of the Steam platform.

Last but not least, the MacGameStore has a unique Rewards Program that earns you points when purchasing games, referring friends, writing reviews and more. All those points can be redeemed for virtual cash that you can use to buy more games. A pretty good incentive to stick with them.

If you’re looking exclusively for games to download for Mac, this is the place to be.

Strength: A handy app including a compatibility checker. A huge collection of games.

Weakness: Not as easy to use as Apple’s Mac App Store.

The choice is yours

Yes, there are many more stores out there. There’s EA’s Origin, Feral’s own store, Amazon, GameTreeMac and even GamersGate (which I used to link to a lot before). They aren’t necessarily bad and if you really love Amazon, go for it. iMore goes into a few of those in detail here.

But trust me, your money will be better spent in any of the 6 stores listed here. In the end, it really is a matter of choice.

I can’t tell you which one is the best because they are all good. Every store listed here has strengths (and weaknesses) and the best one for you will depend on your own priorities.

Do you want simplicity? Go to the Mac App Store. Do you want choice? Go for the Humble Bundle. What about multiplayer? Then Steam is your best bets.

So what is your favorite store? Did I forget to mention any other specific features we all should be aware of? Let me know in the comments section.

Please understand that I only mention games because I believe they’re interesting, good, and/or fun. Never because I received a free copy or to earn a small commission.